From SteamWorld Wiki
Jump to navigation Jump to search

SteamWorld Heist "For a Few Gallons More" is a video game developed and published by Image & Form. It is a 2D turn-based tactics shooter combat in space merged with a survival with roguelike elements. It also features a slightly modified character art style and randomized levels. 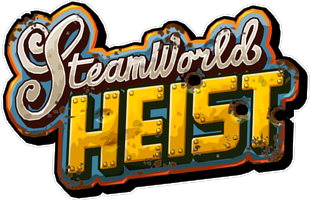 You take on the role of a Steambot space captain called Captain Piper and her motley crew as you go on missions, raiding ships in a free aiming, turn based, shooting combat style. The ships you raid are randomized. Outside of missions, you can go to Space Bars where you can recruit new crew members, talk to other NPC's, and buy Upgrades, Weapons and Utilities.

Hats serve as a collectible item for the game and can be equipped to your crew members. Enemies can also equip hats and like you, theirs can be shot off. They do not increase or decrease any of your stats, they are just for a cosmetic purpose. Another collectible is the Ancient Relics that are old items belonging to the humans that can be sold for high prices.

The story follows the tough-as-nails Captain Piper and her crew raiding Scrappers ships in the Outskirts, attempt to raid their water (fuel). They failed miserably as they only left with the Captain and former sailor Seabrass survived their latest raid.

The game was first announced on 16 September 2014 via the PeePee & PooPoo blog. A campaign called HeistTuesday was set up, where each Tuesday something would be revealed, there'd be an interview or some other SteamWorld news would be revealed.

On 21 April 2015, the Ambassador Challenges were announced over the Image & Form blog. If one of the challenges was won, the winner would get exclusive news on the game and a free, early-access code for the game on any platform.

The first challenge was a weapon naming contest and was won by TheGamingWolf for the name Cranky's Delight. There were also two other winners: James Jackson for the name The Bolt. 45 which was given to another weapon, and Jsty3105 for the name Rust in Pieces which was used as a one liner.

The game was finally released on 10 December 2015 in North America, Europe and Australia. It was met with positive reception and took the top spot on the Nintendo eshop charts for quite a while. Also, until the 31 December 2015, an exclusive 3DS menu theme was included with the game upon purchase.

On 28 April 2016, a DLC pack for the game was released titled 'The Outsider', after being announced and shown off at the Penny Arcade Expo (PAX) alongside the HD version of the game. An update for the game was also released featuring more language options (French, German, Italian, Spanish, and Russian) and added inventory space.

On 17 May 2016, PS4 and PSVita versions were announced with a release date of 31 May and a 15% discount. However, they were delayed by about a week and finally released on 7 June, alongside the Steam version of the game.

Finally on 31 January 2017, Steamworld Heist, together with the Outsider and hat DLCs, released DRM free on GOG.com.

The soundtrack is composed by the steampunk band, Steam Powered Giraffe and they themselves appear in the game as Steambots, on an everlasting tour around the Space Bars where Captain Piper and her crew will be recruiting new crew members. The soundtrack was released both physically and digitally on 10 December 2015, the same day as the game.

Retrieved from "https://steamworld.wiki.gg/wiki/SteamWorld_Heist?oldid=1465"
Categories:
Cookies help us deliver our services. By using our services, you agree to our use of cookies.